POLITICS NIGERIA reports that Salem had been declared missing since October 13.

Parading the suspect on Friday at the Intelligence Response Team (IRT) premises in Abuja, Clement, a commercial driver, said he hit Salem at the Mabushi area on October 13 and sped off.

HOT POST:  Use Corps Members To Fight Boko Haram, Others Who Can’t Fight Should Work Without Pay – Fayemi

According to Frank Mba. the Police Public Relations Officer, Clement was arrested following an investigation by the Force Intelligence Bureau. 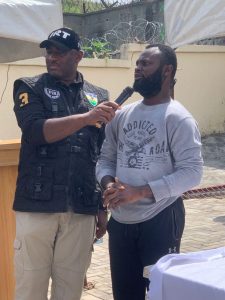 “I thought it was an armed robber that I knocked down until the following day when I saw a smashed phone on my windscreen. The phone was not working again so I threw it away,” Clement said.

On why he did not wait to seek first aid for the person he knocked down, Clement explained: “The place I knocked this person down, is a criminal place everybody knows that place.”